Nova Scotia is an undiscovered vacation destination for many. Most Minnesotans would fly to Nova Scotia, but we decided to take almost 3 weeks one summer for a driving tour to Nova Scotia through Maine and New Brunswick, Canada with the kids. It was what we later referred to

as a meandering vacation: seeing all of the sights, but taking our time to enjoy the highlights and soak in the people and natural beauty.

It was a big adventure and put a lot of miles on the Yukon, but our kids seemed to really enjoy the journey and not just the destination. They are a fun bunch who will go with the flow of their crazy parents’ travel plans. We were lucky; no one suffered from car sickness even when we drove over rolling hills, simulating the best roller coasters at a theme park. We made lots of stops too, and included places we knew they would enjoy like Prince Edward Island, the site of the home of Anne of Green Gables.

Initially we planned an aggressive driving itinerary that brought us from Minnesota to Maine within a few days. After some lovely vistas and eating the best lobsters in the world, we meandered our way north into Canada following the coastline. We stopped at many beautiful 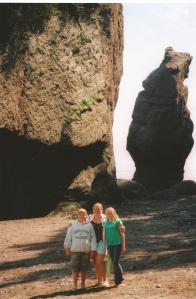 places, including one called Hopewell Rocks in New Brunswick where you can hike around the teetering rocks along the beach during low tide. The rocks look like large boulders on the top, but have been eroded on the bottom by thousands of years of ocean tides, so that it appears that they are teetering on a base that looks too small to support the top. They are located in the upper reaches of the Bay of Fundy, which is an interesting area in and of itself.

This area has the largest difference between high and low tide in the world. It also has reversing rivers that flow one direction at low tide and then the opposite way when the tide comes in. We have been so lucky all of these years in that my husband is not only a brilliant scientist, but he researches any area before we would go and he has an incredible base of knowledge about geography, geology and the oceans. As we moved from area to area, he would show us the natural wonders of the area and give us the historical and scientific explanation.

As we entered Nova Scotia we had seen many beautiful places, but Nova Scotia had a feel all of its own. The road followed the rocky coastline rolling up and down bordered by the deep blue waters of the North Atlantic, and over the brilliant green grasses of the flats where the road is built and bordered on the other

side by the sun drenched, rolling cliffs. It was hard to fully absorb the natural beauty as we drove through Cape Breton Highlands National Park, and stopped periodically to hike a short trail or have a snack while watching the North Atlantic roll in over the rocks.   We slowly made our way to a small ocean side cabin rented for the night. As the kids ran to the cabin it reminded me of the scene at the beginning of the Sound of Music where Maria spins around as she runs through the Swiss Alps. I like to think it was the natural high they were getting from feeling the cool, moist, salty air rising from the ocean mixed with the natural dark green landscape, but it may have been that they had been cooped up in the Yukon for a little too long.

Nova Scotia means New Scotland and this area was settled initially by Scottish immigrants in the early 1600’s. After a tumultuous history of claims between Scotland, France, and England the 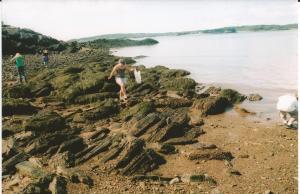 Scotts finally “won out” and make up the majority of settlers in these highland regions of Nova Scotia. Our cabin was in the small seaside town of Inverness. The people of Inverness possess such a heavy Scottish accent that even though we drove there, it felt like we were in a foreign country. It was a quaint little village full of friendly warm people and delicious comfort food. Its small town charm was highlighted by the fact that they were having a wedding and a the wedding dance was at the fire station in town. Evidently the fire station was the only facility large enough to accommodate the wedding, which appeared to include everyone from the town as a guest.

shops that lined the well kept streets, but we took our food back to our seaside escape as we wanted to enjoy every minute at the ocean. We ate and drank in the beauty before us. We walked along the beaches by our cabin and picked up a few pieces of brilliant sea glass and a rock or two, rocks being the kids’ favorite mementos to collect while on vacation. We actually also found a piece of a ceramic plate along the Nova Scotia beaches and daydreamed that it may be a piece off of the Titanic, as we knew that it had sank in the North Atlantic not far from there.

It added to the mystique and wonder of this lovely area to engage the local Scottish people and to dream about the history of this unspoiled place. Nova Scotia gets some visitors, but because it is so remote it has maintained its history and charm and has not been overrun with tourist mobs that sometimes demand more and more accommodations and features from their own
homeland, which can interfere with the natural and basic experience of the area. I like to appreciate a place for its natural beauty; culture and history and not complain that it is not enough like my own home.

Nova Scotia is unspoiled in its natural beauty as well as unspoiled in its people’s love of drink and dance – to celebrate a wedding, dancing the night away to highland music at the town’s fire station. You learn a lot about a place on this earth by meandering through it, without a stringent plan. It is especially precious if you can experience it with family and see beauty through the eyes of your children.