Rome is a fascinating place. Normally my philosophy is that each time you travel you should try a new placed, but with Rome, I could return and spend a month or more. The history and sites are amazing. Everything from the Vatican and Catholic wealth and history, to the crumbling ruins of the Roman Empire, the city is full of masterpieces in architecture, sculpture and 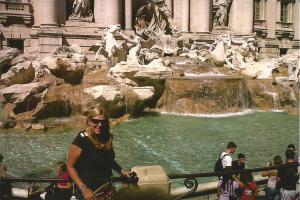 paintings, and you do not have to be an art snob or a history buff to appreciate it.
I graduated from St. Scholastica with a double major in Nursing and Humanities. For the Humanities degree we had to specialize in one area, and my area was history. That bit of prior study in history, even though it had been many years before visiting Rome, was helpful, but not necessary to appreciate the splendor of the city. We did our research before traveling to make sure we see the best things the city has to offer. 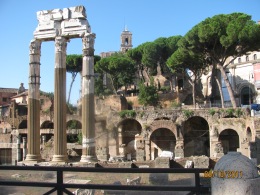 You can take tours of Rome based upon the Dan Brown Novels, like The Da Vinci Code and Angels and Demons, or you can take more general tours covering the most visited and famous fountains and Roman ruins. We opted for a general tour that included the fountains and especially Trevi fountain, which I had read about and seen in the movies all of my life. This tour also covered many of the sites which were in the Dan Brown movies, but also included the Coliseum, the Imperial Roman Forums, the Spanish Steps, the Pantheon and many of the Roman ruins. It lasted most of the day.

We actually saw the Trevi fountain a second time while in Rome while just walking around the city at night on our way to dinner. It was lit in a way that made it look warm, romantic, beautiful and 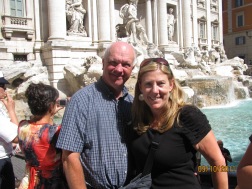 mysterious all at the same time. It was as spectacular as I had imagined. We threw coins in the Trevi fountain and made a wish, just like in the movie Three Coins in a Fountain. Rome was a romantic and beautiful place.

The food in Rome cannot be forgotten. I am a pretty good cook
and I have been trying since we visited Italy to try to make some of these dishes. I have not succeeded. I don’t know if it is the extremely fresh ingredients or the spices or what it is, but I have 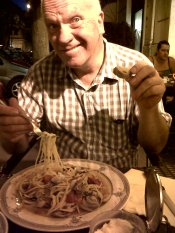 not been able to even come close to that deliciousness. It is mainly pastas and pizza, but it is nothing like what we have here or anything that I could make, and then there is the wine that is amazing and the Limoncello after dinner. Wow! I have not been able to stop thinking about it.

We went on a completely separate tour of Vatican City and saw everything including St. Peter’sBasilica, the Sistine chapel, the Vatican Museum and we even took the 374 winding staircases to the very top of the Vatican Cupola, where we had a clear day and could see across the entire city. Both Joe and I grew up catholic, so seeing the Vatican after all of those years in catholic school was really something special from a historical, as well as personal perspective. 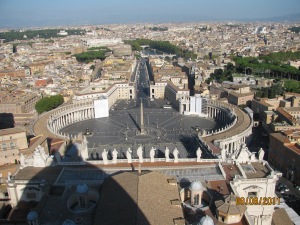 up with an uncle and a cousin who were priests, and six great aunts who were nuns, so I told him I would certainly be welcome, and so started the trash talk of who is the better catholic.

You cannot go into the Vatican with shorts, as you need to have your knees covered and your shoulders covered. We knew this from our research, so I wore a longer skirt and an appropriate shirt with sleeves. Many of the European churches require respectful and appropriate clothing, which is just fine, but it was surprising how many people were being turned away, because they
were wearing shorts and tank tops. Do your research.

We knew that St Peter’s is the site where they believe St. Peter himself was buried. We had also learned from our research that St. Peter’s is literally a burial ground for many of the past popes, and there are supposedly over 90 buried there. Most are interred where they cannot be seen, but St. Peter’s also has at least three dead popes that are on display, some of who passed on many years ago and others like Pope 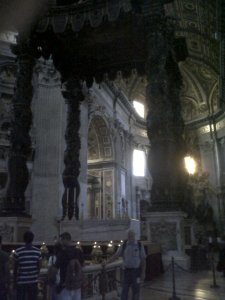 John XXlll who just died in 1963. They are behind glass, encased in the bottom portion of some of the alters, for all to view.

St. Peter’s is a huge church inside, with many alcoves and lots of alters, dedicated to various saints and popes. When you visit you see many people walking around looking at the beautiful statues and the priceless artwork. Others are praying or just reflecting on the history and unbelievable grandeur of their surroundings. People move around quietly, speaking in whispers, in the dimly lit alcoves and under the high ceilings, painted with frescos by the masters. Everyone is trying to get pictures of the beauty around them, even though the lighting is not conducive to good photos.

We were there to see the beauty and grandeur, but I also wanted to see the displayed dead popes and the corpse of Pope Saint Pius X, who died in 1914 and according to the Catholic Church, is showing signs of incorruptibility. Incorrupt corpses are the dead popes or saints, who the church believes do not decay through the normal process of decomposition after death, 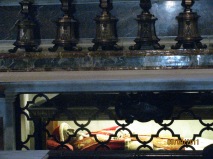 because of their holiness. The theory is that they were so pure, their body does not decay. According to the church, if a body is embalmed, it cannot be considered incorrupt.

When I read about these on the internet before we went, I had to see them. They were bizarre. One looked like he was almost gilded in gold and another just had a creepy washed out, leathery look. Pope Saint Pius X is now considered a saint and incorrupt. There are about ten

saints and popes displayed throughout Italy that are considered incorrupt by the church. One is Saint Francis Xavier, who died in 1552 and another is St. Bernadette who is displayed in France.

Initially, incorruptibility was discovered by accident when the church was moving bodies. Over the years, it has become a religious phenomenon where some believers travel many miles to see the incorrupt corpse, seeking miracle cures and guidance. Because they are incorrupt, the belief is that they have special powers even in death and their sainthood and piety is proven through incorruptibility. 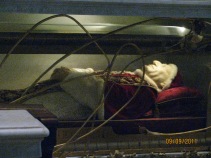 Can a corpse be so pure that it does not decay? Who am I to judge, but it was one of the most interesting concepts and clearly from our visit, you could see that these figures provided many people with comfort and hope. And the reality is that the bodies, despite being many years old, still looked pretty good. Displaying dead bodies can seem ghoulish, but we saw many people praying in front of the dead Popes. Comfort, hope and guidance can come from odd places, but strong beliefs can be very powerful to an individual and the Vatican is a place where one cannot leave without experiencing a powerful presence.

For some, the Vatican is a pilgrimage of a lifetime and for others an interesting historical site steeped in fascinating and tumultuous and sometimes tragic history. But no natter what your religion, the Vatican is a destination that should not be missed. Rome should be at the top of any bucket list. From the Roman ruins to the fountains, the Vatican Museum full of priceless works of art and the city with the best food in the world, Rome is by far one of the most interesting and romantic places we have ever seen.  Its multitude of historical sites,
friendly Italians and rich religious history are an experience of a lifetime. When in Rome, throw coins in the fountain and say a prayer in front of a dead saint. Such places can be powerful and electrifying for the soul. 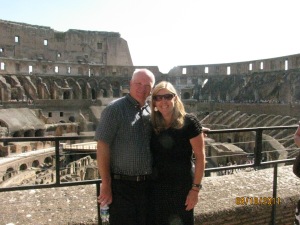 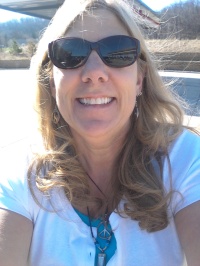